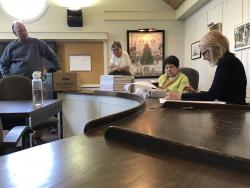 A painstaking hand recount Monday found the vote for a new Katama Airfield hangar was a tie.

The final result was 468 to 468 on a Proposition 2 1/2 debt exclusion question for the $1.2 million plan to rebuild the old airplane hangar at the town-owned airfield.

The hangar project was easily approved on the town meeting floor on April 10, but failed by three votes in the ballot box two days later.

The recount was requested by members of the airport commission and supporters of the project.

The count was held in the Edgartown town hall Monday morning under the supervision of town clerk Wanda Williams. 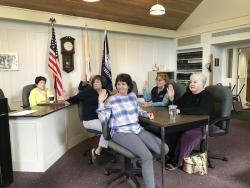 The large black ballot box was wheeled into the room and sat off to the side as the checkers tallied ballots, humans replacing machine for the day. Mrs. Williams demonstrated how ballots with write-in votes end up in a separate compartment. Ballots that have too many votes for a position are rejected and the voter has to complete a new ballot.

The red white and blue voting booth curtains were stored away. Instead of his uniform Constable Ellis wore work clothes and knee pads, which he joked were good for tackling voters who ran away before their ballots could be checked.

“Wanda, does the machine have a name?” Mr. Ellis asked. 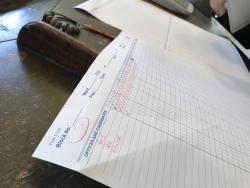 But soon the room quieted down as the four counters, split into pairs, called out results from ballots. Yes, no and blank ballots were tabulated in red pencil on accounting sheets. Ballots were counted and recounted, and shuffled back into stacks.

About 30 minutes in, Ms. White found a ballot where the voter filled in an oval over the word yes instead of the appropriate spot. Ms. Williams was called over. That counts, she said. The ballot machine would have counted it as a blank. That meant one more yes vote.

The counters checked and rechecked their counts. The last packet of ballots was counted and turned over after about 50 minutes. All eyes turned to Ms. Kane, who tallied the numbers with an adding machine.

“It’s a tie,” Ms. Kane said. In addition to the yes filled incorrectly, one vote was incorrectly recorded as no.

“Well, at least it improved our position slightly,” Mr. Vincent said. “Thank you, everyone.”

“It shows how important your vote is,” Mrs. Tyra said.