Scrappy to the Last, Katama Hangar Comes Down 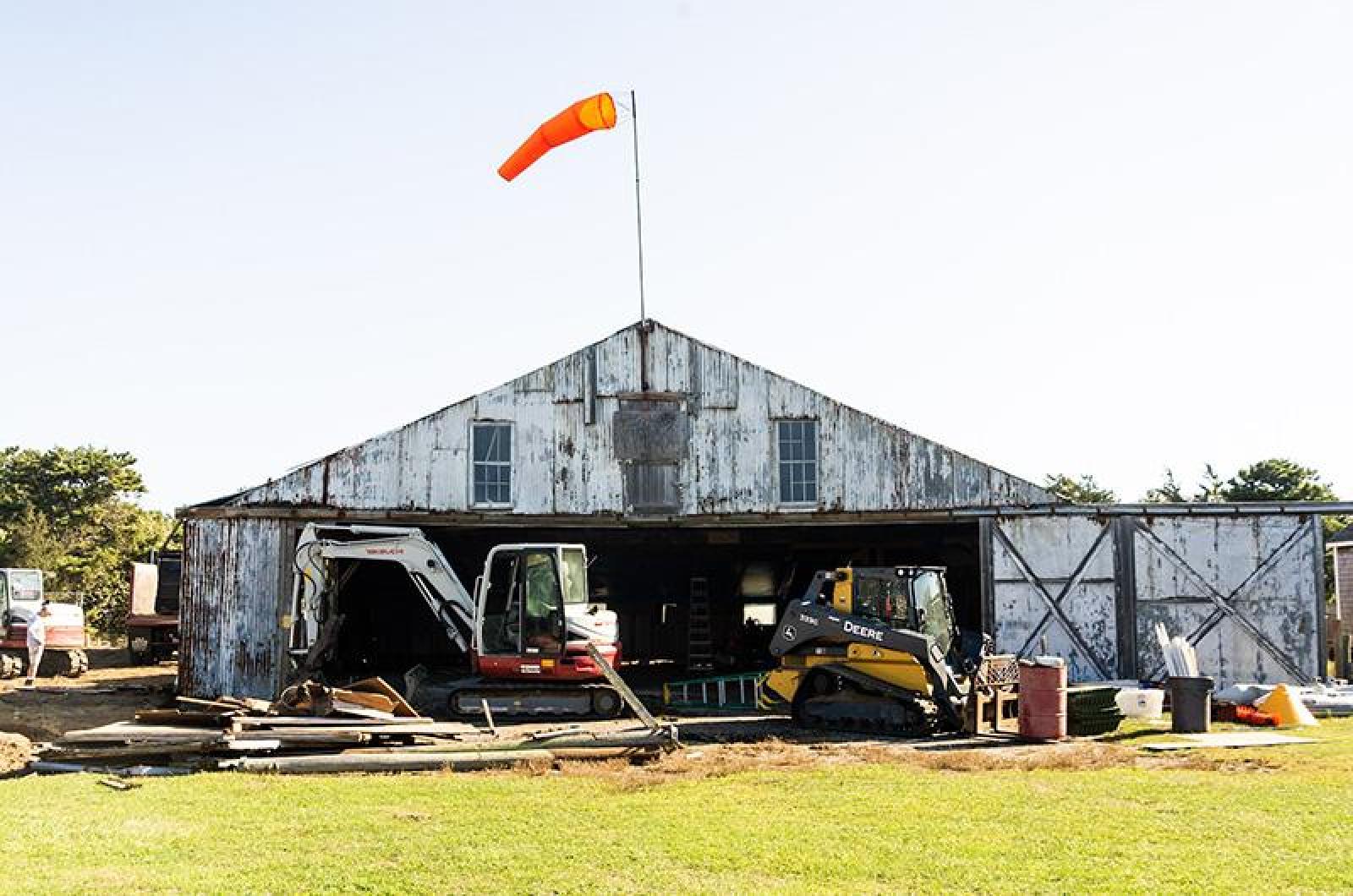 The World War II-era hangar at Katama Airfield was reduced to scrap on Thursday afternoon — not for the first time, but definitely for the last. A new, larger building is set to take its place over the winter. 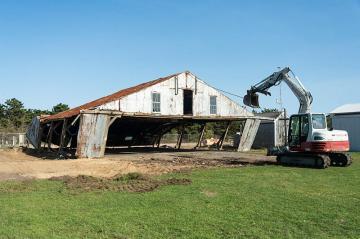 Hangar came down Wednesday, much the way it was built — by hand and with the help of a digger truck. — Ray Ewing

The hangar previously went to smithereens in a 1944 hurricane that left the airfield’s new owner, Stephen C. Gentle, picking up the pieces.

“It was a sorry sight,” Mr. Gentle wrote in a Gazette reminiscence published in 1985. “The doors were blown clear across Herring Creek Road into the pines, and the metal was twisted. The trusses were broken up.”

This week, Mr. Gentle’s son Steve Gentle and daughter Jane Creato recalled how their father — with help from fellow Islanders — reassembled the building after the wartime storm.

“He picked up pieces of tin and bent nails, and (he) straightened nails and he built a section of the hangar, and the townspeople would come out and help us and put it up,” Steve Gentle recalled.

“He went all over Katama and picked up tin,” Ms. Creato said.

“When he built that hangar, he said this is going to be it,” Steve Gentle said. “He put big bolts in it, and big cables, a big cable on the front of the hangar to hold it down in southwest winds. When a storm was coming, we always hooked up that cable and hoped for the best.” 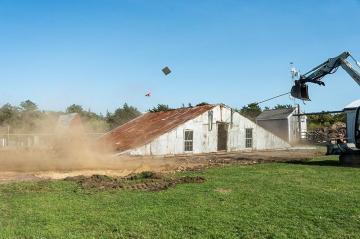 It worked. Mr. Gentle’s rebuilt hangar withstood the elements for more than 75 years.

“It’s sheltered a lot of airplanes, and with those cables attached the hangar stayed there,” said Mr. Gentle, who grew up helping his parents run the airfield and, with his wife Mary, took it over for a few years in the 1960s.

On Wednesday afternoon, the Katama hangar was taken apart by a grandson of the man who had pieced it together after the 1944 hurricane.

Tim Creato of Creato Excavation, Ms. Creato’s son and Steve Gentle’s nephew — and the brother of Mike Creato, whose red biplanes fly sightseers out of Katama — operated the digger truck that pulled down the old building.

Even after doors and first-floor walls were removed, the hangar did not come down easily. A small group of family members and airfield workers watched as the digger truck pulled a chain attached to the building until the second floor crashed to the ground.

With suprising delicacy, the truck’s claw reached again and again into the wreckage, grasping sections of red-rusted, corrugated roof that still clung together though the building that had supported them was gone.

Instead of rust, the roof used to be red with paint, applied by the Gentle children more than half a century ago. 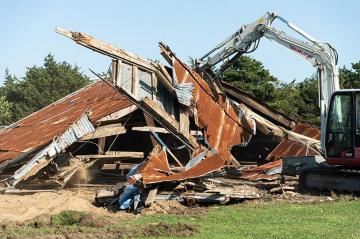 “We used to get free red paint from Texaco and every summer, Steve and I went up on that roof,” Ms. Creato recalled.

“I tied a rope to the wind sock post and tied (the other end) around my waist,” Mr. Gentle said.

The hangar did have a close call one day, after the pilot of a Cessna 180 discovered his battery had died.

“He was propping it (swinging the propeller for a crank-start) and he forgot to put the brake on,” Mr. Gentle recalled.

When the engine caught, the Cessna began moving toward its mesmerized pilot.

“He was standing in front of it hypnotized. I ran out and grabbed him and pulled him out of the way,” Mr. Gentle said.

Both men then gave chase down the runway, catching up with the empty plane in time to grab its tail fin and swing it around. But now the pilotless craft was heading for the hangar, where a Piper Cub was also in the line of fire. 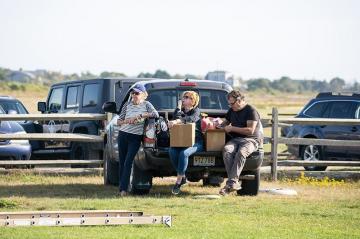 Their own history intertwined with the hangar and the airfield, Gentle family members looked on. — Ray Ewing

“There’s this little yellow Cub, as nice as can be, and here comes this Cessna that’s going to chew it up,” Mr. Gentle recalled.

The Cessna’s propellor went through one of the hangar doors, he said, but the two men managed to avert further damage.

“He always said I saved his life,” Mr. Gentle said of the pilot, an Edgartown retailer. “He gave me a couple of those Country Store shirts.”

Soon a new wind sock will flutter at the Katama Airfield from the top of the replacement hangar, which arrived Monday in a disassembled form.

Airfield manager Alyssa DaSilva said after site and foundation work is completed, the new building will go up on the footprint of the old hangar, where it is expected to open early next year.

While larger than the building it replaces, the new hangar will look familiar, Ms. DaSilva said.

“The [Edgartown] historic commission was involved, to make sure the new building looks as much like the old one as possible,” she said.

Mr. Gentle said he’s glad the new hangar will have more room for pilots, as well as their planes, but he still was sorry to see the last of the old one.